The Society was formed in the early 1970s to provide fishing facilities for the residents of Crickhowell and Abergavenny area. From small beginnings the Society has grown into one of the largest fishery owners in the Usk catchment.

Initially, waters were rented or leased, but since 1975 the Society has been buying suitable stretches of fishing that have become available to the position whereby we now own outright fishing rights that can be conservatively valued in today’s climate at over £900,000. Full details of our assets and beat descriptions are available on the “Maps Pages”.

We have a membership of 200 full members, and this year have started an academy to cater for Junior Members who wish to join the Society. Our club boasts the “First Ever” (Paige Connolly) Junior Member of GAIA (Game Angling Instructor Association)

We are fortunate to have GAIA qualified members who teach “Single & Double Handed Casting” plus “River Craft” and “Fly Tying”.

We run a “Skills Day” every year where the public are able to take the opportunity to learn these skills.

We also have a guest ticket scheme where members can take and encourage friends and family fishing.

There is at present a waiting list for membership of the Society.

If you wish to join the Society please contact the Hon Secretary, Hon Treasurer or Chairman to discuss. 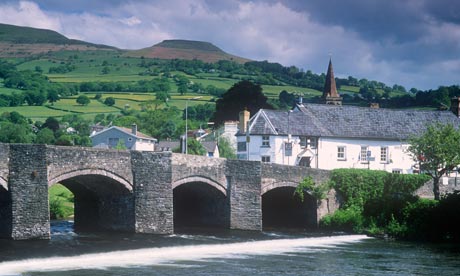 The River Usk, Afon Wysg in Welsh, rises on the Black Mountain above the Usk Reservoir then the River Usk tumbles for most of its upper and middle reaches through the beautiful Brecon Beacons National Park. After passing through the market town of Brecon and the pretty little town of Crickhowell, the river leaves the Park at Abergavenny and meanders through the farmland of the broader valley beyond. Shortly after the attractive town of Usk the river becomes tidal and enters the estuary at Newport, where it mixes with the waters of the River Severn in the Bristol Channel. It is the deepest river in the British Isles at its mouth and has the second largest tidal range in the world after the Bay of Fundy in Canada. As a salmon fishery the Usk is traditionally second only to the River Wye in Wales…..

The Usk describes its lower fishing as below Usk town to its tidal reaches, a mile or so below Newbridge-on-Usk. The middle section lies between Usk and Crickhowell and the upper reaches above Crickhowell, Brecon and beyond. Given sufficient water salmon can populate the river all the way to Crickhowell within two days or so.

The nature of the river below Crickhowell remains much the same with deep pools, long riffles and big meanders the norm. Above Crickhowell the river is faster and straighter. None of the tributaries offer any significant fishing but play an important part in fishing where they join the main river and can have impact with summer storms to liven up particular stretches. 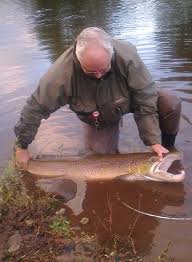 Salmon fishing on most fisheries allow fly, spinning and worm. Some fisheries restrict worm and spinning under certain conditions. The lower stretches always have fish even during low water where they run off the exceptional high tides that the Usk is famous for.

It takes a good spate to rapidly populate the river from April onwards. In recent years some large springers have begun to appear again. The middle reaches come into their own with small summer floods pushing fish in to the holding pools that abound he upper river fishes best in the autumn.
The grilse run starts at the end of July and can provide excellent sport throughout August before the main salmon run which given water will start in September through to the end of the season in mid October where sighting salmon running the numerous small streams is a joy in itself.

The River Usk’s reputation for wild Brown Trout was unrivalled for many years in Britain. During the past 40 odd years it had taken a decline but the trout fishing has improved dramatically in the past decade following excellent work by local conservation bodies. Stealth for daytime fishing and perseverance for late-evening and night-time can bring the best rewards. 1½lb fish are not uncommon and fish of 3½lb plus exist in nearly all stretches though not easily extracted.
The valley has seen a culture of catch and release emerge for these specimen fish which bodes well for the future. Although not a mayfly river some do appear in early June but rarely tempt significant rises. Trout start to show in March to March Browns, followed rapidly by huge swarms of Grannom, then large Olives and May Duns until July. From then on Caddis/Sedge and Olives play an important role. Summer success often comes with size – 18/20 gnats or kinkhammers late into the evening – before things normalise as the September autumnal rains arrive.

The Usk is not a renowned sea trout river along the reputation of the Towy, Cothi and Tiefi. That said, some fish do run from June onwards, though rarely seriously fished for, trout fishermen are busy casting size 18 flies at dimpling trout.